Everything you need to know about the ArcoLinux Tweak Tool 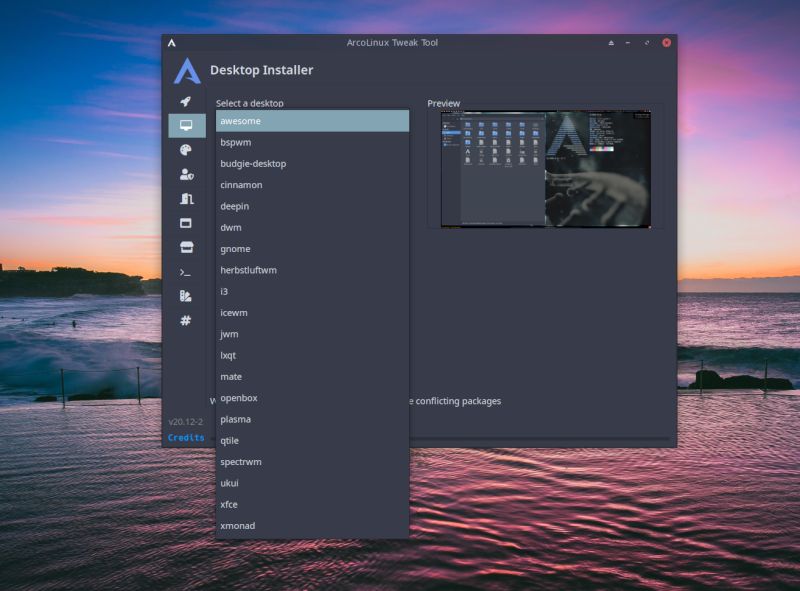 Screenshot of the last version

Launch the arcolinux-tweak-tool from a terminal

More packages have been added to the list of the desktops.

Some package conflicts can be safely avoided. When selecting Budgie, Catfish is removed from your system.

Other packages conflicts can not be avoided.

Deepin conflicts with Budgie in two packages – clutter and cogl because of Arch Linux packaging.
We want you to be aware and responsible to make that choice. We will not automate this in the ATT.

If you want Deepin together with other desktops then there are two options:

Option 2: install Deepin via terminal and choose to say ‘yes’.

If arcolinux-termite-themes is not installed (ArcoLinuxD or Arch Linux) you will get a button to install it.

If you are not on i3 or awesome, you will get the message that you will be able to use that tab to change themes if you are on either desktop.

If you are not on zsh, you will get the message that you will be able to use that tab if you change your shell.

The tab only shows IF you are on zsh and not on bash or anything else.

Here you learn how to switch your shell to zsh or back to bash.

ABandoned – not in use anymore

We have our own ArcoLinux application to logout or lock our system i.e. arcolinux-logout-git.

If you keep the packages, ATT will show the tabs. However we will NOT develop or maintain them anymore.

Getting ArcoLinux up and running under 15 minutes with arcogetstarted

How to install caffeine – any desktop

Install any desktop on any ArcoLinux or Arch Linux system

Do you know our tweak tool?